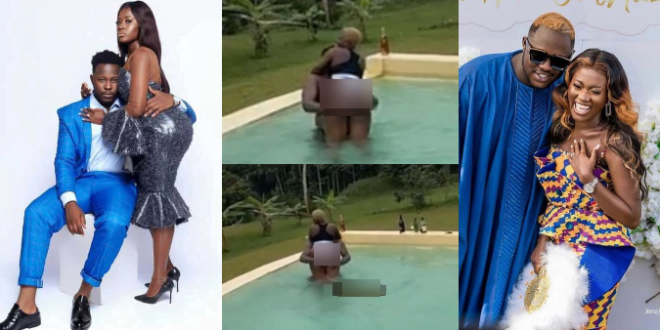 Mr. and Mrs. Frimpong are having the time of their lives today, April 5, 2021, as Medikal celebrates his 27th birthday.

Medikal’s birthday celebrations began at home with a surprise from his wife, and they continued with an early morning road ride, which brought them to where they are now.

Medikal and Fella are making the most of their birthday celebrations because they were seen floating in a large pool.

The AMG member, who had been spotted at the pool’s far end, summoned his wife to join in the fun.

Fella followed him in her black and white swimwear in a lovely way. As soon as she arrived at Medikal’s place, he picked and squeezed her prized possessions in the back and lifted her for a few seconds before they returned to swimming.