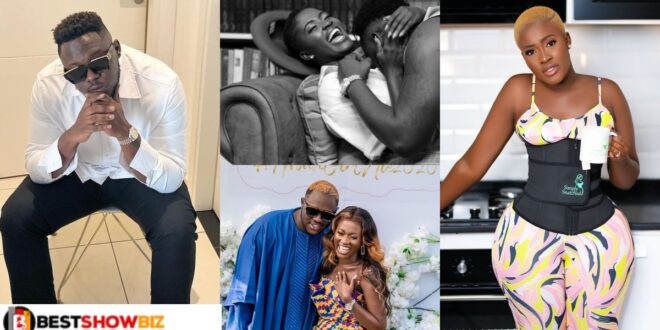 The Frimpongs (Actress Fella Makafui and rapper Medikal) have released a romantic video to dispel rumors that their gorgeous marriage is in trouble.

We published a post from an IG blogger alleging that Fella Makafui and her spouse, Medikal,’s marriage is in jeopardy.

According to the post, Medikal is unhappy in his marriage and wants a divorce after his wife, Fella Makafui, went on a business trip to Dubai.

According to the blog, the actress’s trip was not for work, as she said, but for a slay queen rendezvous with wealthy guys in Dubai for money.

Fella Makafui turned to social media to upload a video of herself and Medikal laughing as they traveled to a late-night gathering.

Social media users have interpreted the footage as an indication that the pair are not at odds.

In the video, Fella and Medikal jammed to the music playing in their car, as they have always done online, and you could tell by the vibe between them that their relationship is not falling apart, as has been reported.

However, the speculation that surfaced stated that Fella and Medikal are accustomed to fake happiness on social media, and this may be one such situation.

You can see them in the video below.

Read Also  "My mother wanted to abort me, but my grandmother intervened"- Shugatti
Share