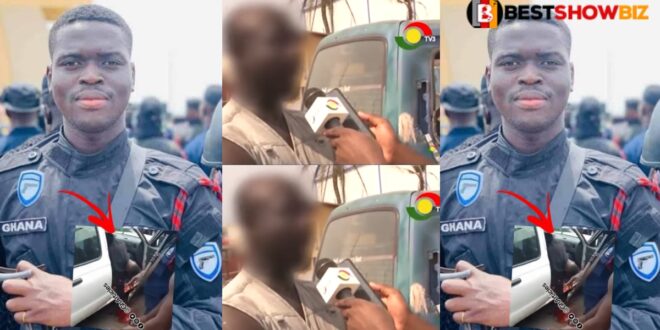 Kwesi Mintah, a mechanic who runs a business near the location where a police officer accompanying a bullion truck was shot dead, has revealed his story.

The mechanic said he heard gunshots the moment he left his business to go buy 1 cedi worth of Akpeteshie, according to a TV3 interview seen by Enewsghana.com.

He stated that he needed to eat his lunch. He did, however, visit the ‘blue kiosk’ in order to get his favorite food as a beginning.

According to Mintah, he had a tight escape when a bullet from the armed robbers’ erratic firing struck one of the automobiles he was working on.

Despite his sadness at what had occurred, the mechanic was grateful to God that he had averted death and that his life had been preserved.

Emmanuel Osei, the police officer who was accompanying the vehicle, was tragically killed after he was shot in the head numerous times by the armed thieves.

As a result, the police have begun an inquiry into the incident, which also claimed the life of a 40-year-old mother of three.

Armed men chased the mother of three after she raised an alert.

Meanwhile, Afia Schwar, a notorious Ghanaian actress, has spoken out strongly against the incident.

According to her, the service’s attitude puts the lives of additional police officers at jeopardy.

In the video, Afia describes how the Ghana Police Service rejected down her offer of security.