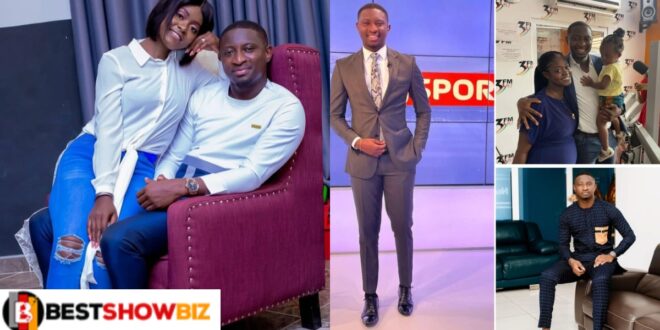 Many ladies are disappointed in Tv3’s Thierry Nyan after photos of his marriage surfaced online.

Heated arguments have erupted on social media over whether Tv3’s Thierry Nyan should be called out for his behavior or let off the hook following the discovery of anniversary images of him and his extremely gorgeous wife by certain bloggers.

Many people argue that because it is a personal affair, he has discretion over how he handles it. Others, on the other hand, believe that the fact that his ring is absent from his finger and he has few photos of his marriage generally leads him to trouble.

For those who side with the journalist, many of his coworkers, like Ayisha Yakubu, who just married, do not conceal their marital status, so why would he?

Read Also  Owusu Bempah Goes wild; Rain Curses on Those Mocking Him Over His Failed Prophecy

This is because if he did so as a result of his business employment, his other coworkers would have to conceal their marriages as well and follow suit, which is not the case, leaving him with no justification.

His ardent followers continue to defend him by pointing out that images of him and his family are displayed at his place of employment, implying that he has no intention of concealing his marriage but only desires a quiet life.