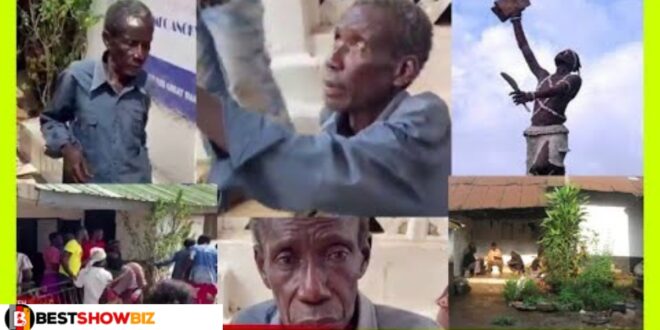 After Urinating at a sacred site at the Komfo Anokye temple, a manh00d has Erected without cooling down.

Hundreds of people have visited the Komfo Anokye shrine in Awukugwa as a result of the man’s deed and its consequences.

The man with the Erected manh00d in his shorts is shown in videos from the scene.

According to a local Angel Fm reporter, the man is from Tutu and visited the Awukugwa temple yesterday.

He asked for the special spot assigned for Komfo Anokye at the shrine, drew down his shorts, and began urinating.

His manh00d Erected among discomfort after urinating, and it’s still up.

The residents of the town believe the man committed it as part of a ritual.

The elders of Awukugwa have asked for the man’s family’s permission before appealing to the gods of the land to heal him.