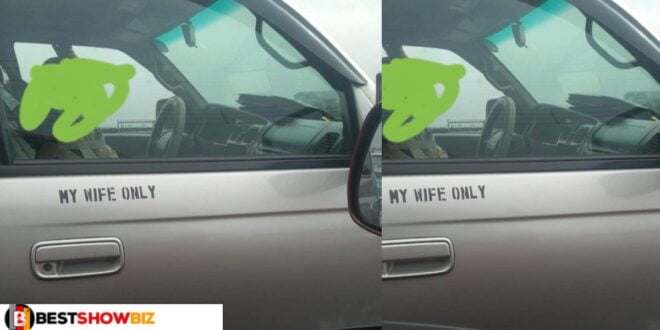 A man has sparked outrage on social media by using his car to deliver a statement about the never-ending discussion over who deserves to sit in the front seat.

There will always be things that people will never stop talking about, and one of them is the controversy over whether a mother or a wife ought to sit in the front seat.

The Nigerian, who is claimed to live in Port Harcourt, River State, was captured in a viral photo using his car to convey a clear message to onlookers.

According to the writing on his car, he emphasized that the front seat belongs only to his wife, so if you want to hop in his car, you should think twice before doing so.

Read Also  "Kweku Oteng is too st!ngy to be Tracey’s sugar daddy; he gave Emelia nothing after an affair"- cutie_juls

A Journalist, Uche Okoro, uploaded the photo on a popular micro-blogging site, as he scribbled on the car, “My Wife Only.”

@HopeJoshua16; Me when I finally marry

@chuuokoye; Men are not scum.

@Razor_Maroy; The wife probably did that.

@pelmzy4real; Someone’s wife died and he locked that door permanently. If he gives you a lift na back

@CodedCF; …with this, no sane person will enter that vehicle

Read Also  "i dont care what people say, i love my twin brother and wants to marry him"- lady reveals (video)
Share