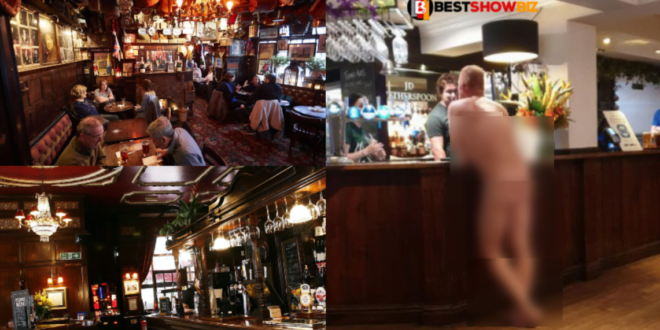 A bar attendee was taken aback when he discovered a man who was entirely naked in the establishment.

The individual who shot the photo posted it on Reddit, claiming that he was present when the incident occurred on Tuesday, September 14.

“Wetherspoons on a Tuesday night NSFW (Not Safe For Work),” the pub-goer commented on Reddit.
In the photograph, two bartenders can be seen working behind the counter of the pub, while the naked man stands on the other side of the room, comfortably leaning on the wooden bar.

A poster claiming to be the bartender in the photograph made the following hilarious comment: “I’m the one that works behind the bar. This is not the most bizarre thing I’ve witnessed while working at Spoons.”