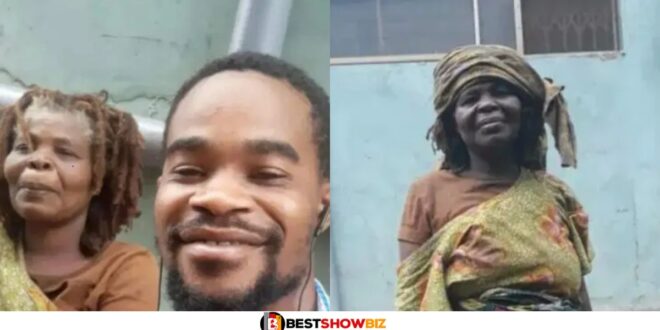 A young man recently garnered the support of many on social media, more specifically the Tell It All Group on Facebook, when he expressed revealed that his mother was mad.

The anonymous user uploaded a photo of his irate mother to social media and pleaded with others to acknowledge her on her special day because it was her birthday.

His post moved a lot of people, and as a result, they showed their support for him by giving him cash and other presents to help him with his asylum application for his allegedly mentally unstable mother.

However, following the publication of the post, it was discovered that the young man in question is a seasoned con artist and a previous inmate.

It would appear that his old employer has outed him for stealing laptops and money from the organization he worked for in the past.

After negotiations are being made for your family to pay for the laptops and cash you stole from my company, you haven’t ended it there. Today you’re posting in a Facebook group that your mum is mad. When did your mother become mad?

You’re doing everything possible to bring her back to normal, and she’s still in that same old dirty clothes? You that you’re the mad man of your family and they’re trying possible ways to cure you.

You’re using a mad woman now for your atrocities? Seeking donations for a mad woman isn’t the problem, but saying she’s your mum when she’s actually not even your family member, is the problem.

It’s sad and pathetic that she won’t even get those donated monies at the end. You’ll use it for yourself. Who uses a mad person of another family to make posts and seeks donations and all that? Since you’re using a mad person to your own benefit, you’ll get mad at the end. Whatever made her mad, will come to you surely someday soon.

Madness isn’t something to make lies about and claim sympathy for. You’re indirectly telling nature that you want to take this woman’s burden of madness. Nature will surely grant you. Keep on!!