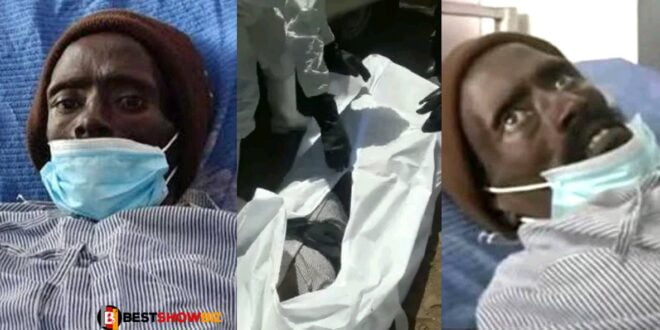 People can suffer from heart failure, but they frequently misinterpret it as true death because the person affected will stop breathing for a period of time before regaining consciousness.

This is the story of Mr. Kigen, who was taken to a local hospital in Kenya’s Kericho County. According to reports, he was very ill to the point where general hospital experts couldn’t handle his position any longer.

Because they couldn’t control his situation, the physicians told the man’s family that he was dead. When the family arrived to take the corpse to the mortuary, the mortuary attendant accidentally cut the man’s flesh while attempting to remove the leather-wrapped around him, and the man awoke and began crying for aid.

Read Also  I have a licensed gun which I protect myself with it - Rev. Owusu Bempah (video)

According to sources, an autopsy was performed before his body was deposited in the mortuary, however, the pathologists who performed the autopsy in collaboration with the general hospital’s doctors filed a fraudulent report.

The doctors and pathologists, on the other hand, are being investigated by the health committee for lying to the man’s family. Unfortunately, according to confirmed sources, the man died later after being inadvertently cut by a mortuary employee while being prepared for burial.