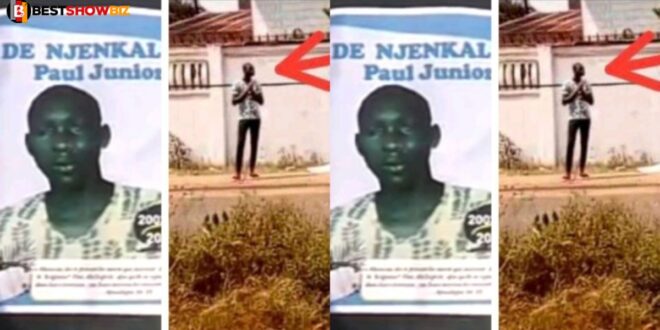 The story was shared on the ADE Divine Facebook page, and the dead boy’s name was given as Junior Njenkal. Junior died as a result of consuming too much alcohol.

He was last spotted in the streets of Duala, Cameroon, shortly after his death.

Someone who knew him and was aware of his death noticed him and pulled out his phone from a safe distance to record the deceased youngster as he waited for a two-person bike to take off.

According to the Canal2 Report, the boy’s mother arrived at the morgue to take him out for the Service of Song, but was informed that the deceased boy’s paternal grandfather and uncle had already taken the body away.

It occurred in Cameroon, which is sometimes referred to as “Africa in miniature” due to its physical and cultural variety.

The Central African country boasts one of the highest literacy rates on the continent, but corruption and decades of authoritarian government have impeded its economic progress.

A postcard of the boy who died in 2020 is shown below.

Meanwhile, the family was busy preparing for his funeral when they received word that their alleged dead son had been seen boarding a bike. They went to the mortuary, only to be told that he had been taken away.

A video of a woman giving an interview in French is seen below.