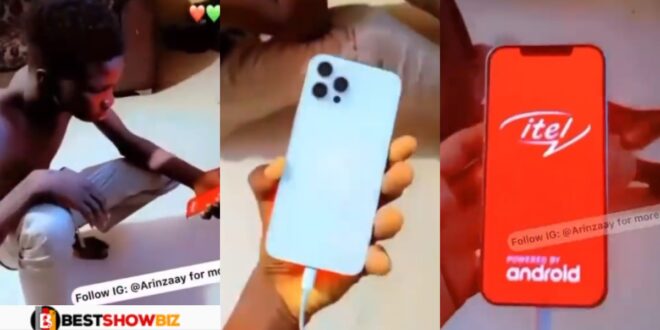 A young man has discovered that he has been scammed after he was sold an itel phone that was disguised as an iPhone 12 pro max in the town.

The young man, whose identity has not yet been revealed, was seen sitting on the floor of his room as he attempted to turn on a fake iPhone that had suddenly displayed the Itel symbol on the screen of the phone.

His friend, who was seen filming the video, stated that he had urged him not to purchase the phone in town, but that he had ignored his friend’s advice and had instead been scammed out of his money by some con artists.

Netizens who saw the video expressed surprise at how somebody could be so depraved as to sell something that appears to be an iPhone when they know full well that it is not an iPhone, according to the video.