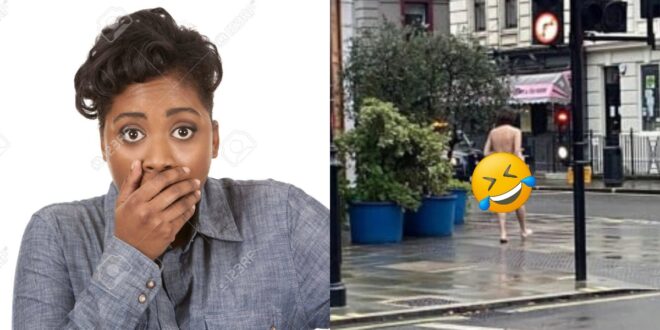 Man goes [email protected] on the streets of London – Photos

A man has been spotted walking [email protected] on the streets of London.

on Sunday afternoon, Jan 24 this unidentified man was seen on the streets without clothes walking towards Bloomsbury Square Gardens.

when he was asked by a passerby why he has removed his cloth, he reportedly replied;

“I just took my clothes off to wash myself” before continuing his walk.

A witness identified as Catherine, 22, said she turned around on Great Russell Street to “notice a stark naked man walking down the road” at around 3.45pm.

she told Mylondon that; “One man stopped him and asked why he was naked to which he casually replied ‘I just took my clothes off to wash myself’ and carried on walking.

“My friend called the police who said the museum security had already called it in, then asked for a description of the man.

“Once he walked past the museum he started running and we lost him.

“A few minutes later a police car and an ambulance were patrolling the area.”

the Police spokesperson said: “Police were called at 3:53 pm on Sunday, January 24 to reports of a man seen walking naked in Great Russell Street.

“Officers attended and carried out a thorough search of the area. Nobody matching the description was found,” he added.

Read Also  Photos of the only Lady shatta wale has signed in to shatta movement Label.
Share