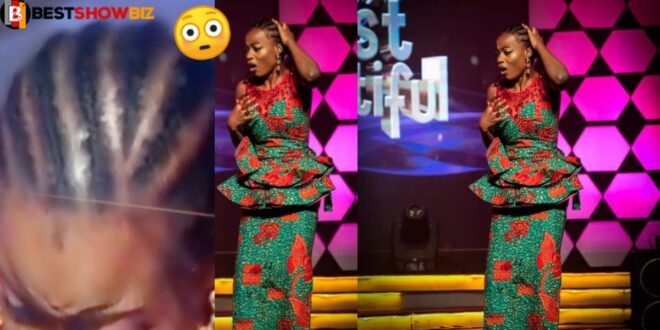 Man walks on Ghana’s most beautiful stage to remove the wig of a contestant.

When an enraged young guy ascended Ghana’s Most Beautiful Stage on TV3, it was a fantastic moment.

He aggressively tore off the wig of Savannah regional contestant Arama and flung it into the audience in front of live cameras. He also kicked her to the ground and began punching her in the abdomen with his feet. In a fit of rage, he screamed at the top of his lungs.

People were perplexed. This was then revealed to be a deliberate conduct by Arama in order to represent domestic abuse against women. Because the Act seemed so genuine, you might be tempted to call the cops straight immediately.

Her wig was nowhere to be found as she strutted across the stage with her braids. Arama had a fantastic performance.