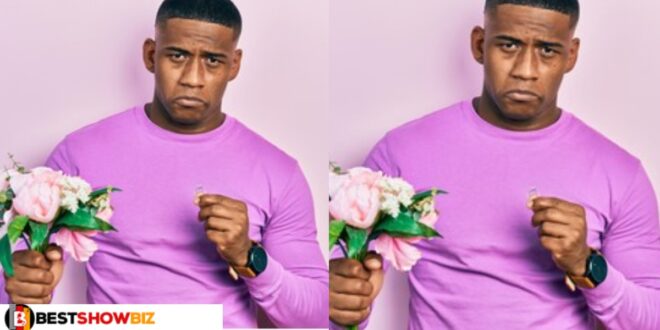 A Nigerian man living abroad decided to surprise his wife with a special gift, and he was surprised to find her in bed with another man who was ‘giving it to her back and front.

An online vendor was contacted by the man, and a purchase order was placed on his behalf, which was then delivered to the woman.

The online vendor had trouble finding the lady’s house because she did not return her calls, so she asked a neighbor who directed her.

The saga began when the man requested that the vendor record the surprise so that he could see the woman’s reaction.

This turned into a disaster as his girlfriend emerged in a towel, followed by the man who was having sex with her.

”A follower on Twitter asked I visit his gf today in Lagos since I said today is visiting day.

I picked up gift items for her like he instructed. I took a ride to her house for the surprise visit. Got to her compound and called her line severally, she didn’t pickup.

Someone came Out of the compound and I asked of Julie(not her real name). I was directed to her flat. Few steps from her flat I heard moaning I convinced myself that maybe her friend was using her room, besides it could be anything.

He pleaded I do a video call when I get there. I did call him and I started knocking and awaiting responses. She came out after few minutes in towel wraps. While I was explaining why I came around and I switched from front cameras to back camera the dude inside came out calling her.

The lady was trying to close the door but it was too late. I left really unhappy. Her bf is outside the country, took out time to make her feel happy and she does this. He literally cried when he saw another man in the house he pays for. He said a lot of things & I was weak. I only wanted to surprise his gf.

Read Also  "Don't compare me to Moesha, she has her life and I have my life"- Hajia4real angrily blast interviewer (video)

Didn’t know it will end this way. Why are some people so lucky to see good men yet they misbehave? He comes home 3 times a year, flies you out twice a years so you see him, spoils you good & you to hurt them.

Shey I will not stop this visit like this. This one that first visit has started bad. I just wanted to put a smile on people’s faces oo”