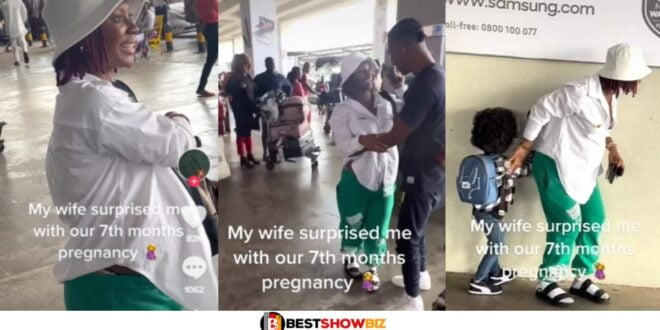 When a man shared the shocking thing he had found out about his wife on social media, it caused a lot of talk and debate.

The Ghanaian man, who had been absent for a considerable amount of time, stated that he was taken aback to learn that his wife was seven months pregnant.

A video that was uploaded to TikTok recorded the happy moment when the couple saw each other again after being apart for some time.

When the woman with the swollen stomach first saw her husband from a distance, she did not hesitate to instantly leap on top of him.

The couple was so happy to finally see each other that they didn’t mind making a scene at the airport when they arrived there together.

People on the internet were mystified as to how he was aware of his wife’s pregnancy in the first place. The man, on the other hand, guaranteed that he will provide further clarification on this matter in a subsequent update.