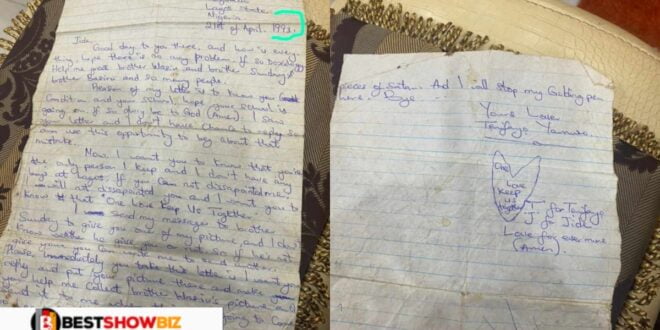 A letter a woman addressed to her husband 28 years ago apologizing for offending him revealed the significance of forgiveness and sincere displays of love and affection.

Tola Davids shared the letter, which was written in 1993. It is the story of a woman who was trying her hardest to persuade her husband to accept her apology.

Many people have praised the woman for apologizing for her mistake and demonstrating humility.

Many people believe that this virtue has been lost in modern relationships and marriages when both men and women do not wish to lower their egos.

Many separations, divorces, and breakups may be avoided if the virtue of forgiveness could be instilled in modern relationships and marriages.

see the letter and some reactions on social media below;

Duke of Ibadan commented: One love indeed kept them together.the only girl i ever wrote a letter was my principal’s daughter, Na her father read the letter. The rest was history

Tunde Westside commented: The fact that your dad kept till now means that what they had was genuine

Tunde Tosin wrote: Phone and Internet brought flexibility and ease, but took away sincerity. It’d be hard for you to doubt the author of that letter going by the stress they went through to write and have it delivered. And you’d be left with no option than to reciprocate in kind.

Daniel Regfha commented: The above love letter was pleasing to read, brother Sunday tried for the couple; Mgbeke love of the old days are the best, n¤t all these “Urgent 2k & ShopRite” love of nowadays. Shout-out to all my ex classmates who wrote yeye love letters but ended their relationships after 2go.

Darmson wrote: That generation held long distance relationships without everyday texting, exchanging pictures and video call. How did they???