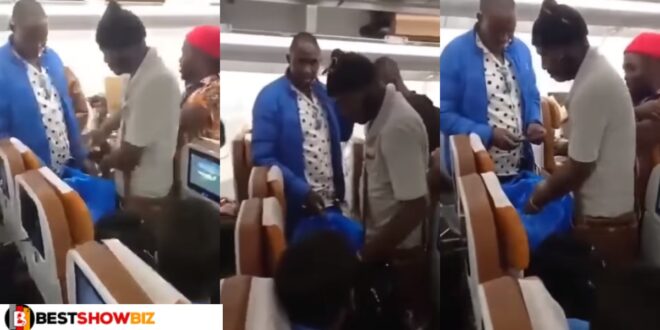 A video that is quickly going viral on social media shows a young man selling grasshopper meat in a plane before it took off.

The event in Uganda showed the man selling the meat in the plane as passengers flocked to try the tasty animal that was being offered.

According to reports, Uganda Airlines employees were suspended for allowing a grasshopper vendor to join the lane when it was intended to be reserved for passengers flying out of the country.

Speaking about the matter, Gen Edward Katumba Wamala, Uganda’s Minister of Works and Transport, disclosed that he ordered the suspension of a part of Uganda Airlines workers following a viral video showing a guy vending grasshoppers (Nsenene) onboard.

Read Also  'I feel sad, Medikal is not with me to celebrate our one-year marriage Anniversary'- Fella Makafui