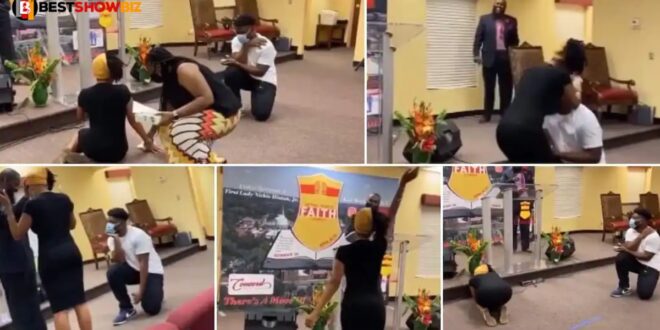 Man proposes to his girlfriend in church whiles pastor was praying for her.

While a pastor was praying for her, a man proposed to the love of his life in the church, causing quite a stir. In the endearing video, the unwitting lady is overcome with astonishment and falls to the floor while attempting to confirm if it is true.

A stunning proposal surprise was given to a lady, which many people have deemed to be one of the nicest thus far. While a minister prayed for her in a church, her partner made the move (proposed).

The man sat in the front seat and observed intently as the pastor prayed for the lady, according to a video published on Facebook by BI Phakathi.

When he realized the preacher had finished his prayers, he hurriedly went down on one knee, holding out the engagement ring.

The lady had no idea what was going to happen. The unwary lady returned to her seat only to be confronted with the proposal. The lady went mad and initially collapsed to the floor, overwhelmed by her emotions. She then rose up and raised a grateful hand to God while softly sobbing. The lady ran back and forth and let out a scream as if wanting to establish that she wasn’t seeing things, while the church applauded her. She got the ring eventually and hugged her boyfriend.