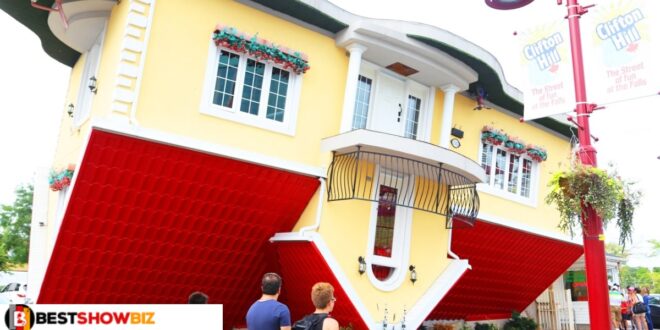 Man makes history as he builds an upside-down house, see video of the exterior and interior of the house (video)

A man stunned the world by pulling off an unprecedented architectural feat that has gone viral on social media.
The man, Marek Cyran of Niagara, New York, said he got the idea to build his house upside down after seeing one in Poland while on vacation.

However, when he returned and proposed the idea to his community members, they mocked him and said such a thing would be impossible to implement. He was motivated, however, by their pessimism, which prompted him to give life to his idea.

Fast forward to today, and he has succeeded in erecting a one-story building at Niagara Falls, which has now become a tourist attraction center where people pay a fee to view the exterior and interior.

In a YouTube video by Kool Buildings, the man’s roof shares all aspects of his incredible house—which is upside down—while introducing viewers to its features.

The interior also shows the kitchen, dining table, bedroom, and other parts of the rooms, including an overturned decorative plant.