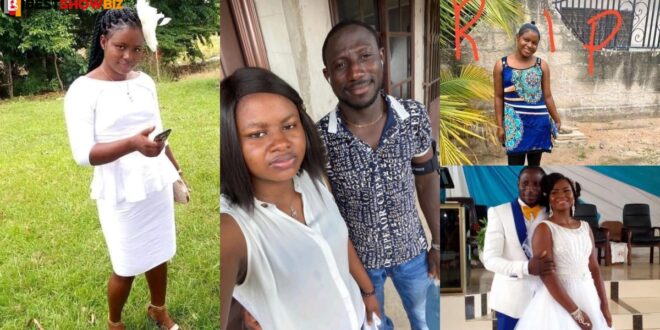 Man k!lls his wife in Bibiani with a knife after she threatened to divorce him

The hunt for Emmanuel Okyere Baffour, who reportedly stabbed his 26-year-old wife to death, has begun in Bibiani, Ghana.

Joyce Johnes, Afi Jassika, threatened to divorce him and that led the suspect to do the deed.

Last Thursday, August 6, the event occurred in Degede, a Bibiani neighborhood in the Bibiani Anhwiaso Bekwai Municipality of the Western North Region.

Superintendent Seth Serwonu of the Bibiani Anhwiaso Bekwai Divisional Crime Office, who corroborated the claim, said the event was reported to the police by relatives of the deceased.

Police arrived on the site and discovered the dead in a pool of blood with several stab wounds, he added.

Read Also  Beautiful University Graduate poisoned by a Man because she rejected his proposal.

The corpse has subsequently been lodged at the Bibiani Government Mortuary for examination, and police inquiries into the perpetrator’s whereabouts have begun.

According to Supt Serwonu, the preliminary inquiry indicated that the deceased wanted to divorce the accused spouse for a variety of reasons, but the husband pleaded with her to stay, claiming that he had changed his mind.

The lady, on the other hand, persisted in leaving the marriage, packing her belongings and leaving for her parents.

He said that on Thursday, August 6, 2021, about 12 p.m., while the deceased’s parents were not there, the suspect went to her residence and attacked her with a knife.

Read Also  Woman Proudly Shows Off Her Two Husbands, Says They Live Together In Peace

He allegedly stabbed her five times, then fled the scene by covering her corpse with the garments in the room.