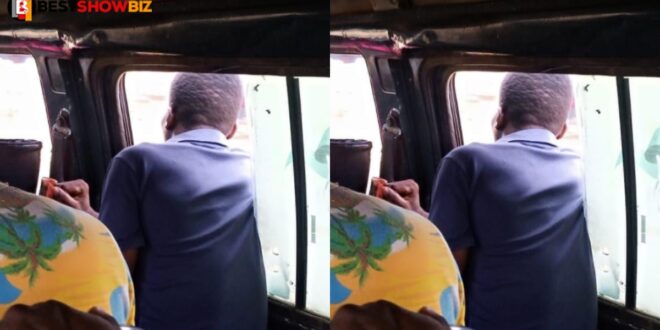 Dave, a Ghanaian guy, has resorted to social media to report a recent experience he had with a former classmate who was once one of the tops in the class.

Dave posted on the Trotro Diaries Facebook page that he joined a commercial vehicle (trotro) and immediately recognized the face of the vehicle’s conductor (trotro mate).

He’d quickly realize it was an old classmate. His friend, who had also identified him, asked him not to bother as he leaned forward to pay for his trip.

Dave summoned the confidence to ask his former mate how he came to be a ‘trotro’ mate.

According to his pal, he lost both of his parents after junior high, and that’s when things started to go awry. The ‘trotro’ mate claimed that he had aced their final tests, but there was no one to assist him. After failing at previous street endeavors, he had no choice but to become a ‘trotro’ mate in order to provide for his brothers.

Dave explained that his former classmate was an outstanding student who consistently placed first in his class. He was well-liked by both instructors and pupils, and he was elected as school prefect with no opposition. He took part in interschool quizzes because of his intelligence. Everyone at school, according to Dave, believed his friend had a bright future ahead of him.

Dave requested that Ghanaians remember his friend in their prayers.