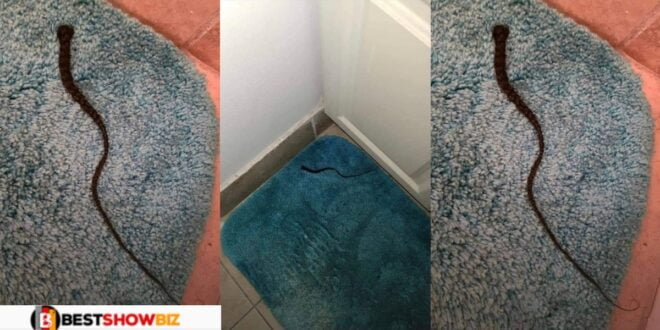 After seeing what appeared to be a snake in the middle of the night on his way to the washroom to relieve himself, a Nigerian man was terrified and nearly passed out.

He claimed that as a man, he did not want to switch on the light and that when he was walking to the washroom to urinate, he noticed the snake lying unmoving, and that panic overpowered him, and he fell down and peed on himself.

His wife’s braided hair, which she had removed the night before, was apparently the source of the problem. The following is the complete text of his social media post:

Read Also  A KNUST student narrates what really happened; leading to the death of colleague student.

“Last night, I awoke to use the restroom. I didn’t want to switch on the lights because we males can pee using our night vision, but then I noticed something on the floor that looked like a snake, so I tried to cut off the pee and flee, but it didn’t go as planned, and I went down, wetting the floor.

I soaked everything. It wasn’t even a snake when I woke up and turned on the light; it was one of my wife’s damn braids that she had ripped out earlier. I guess she’s trying to kill me.”