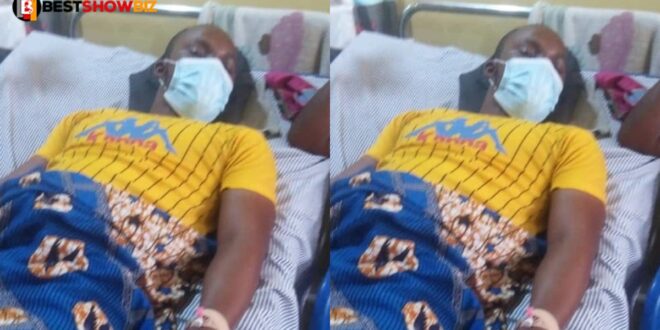 Man fa!nts and gets an instant stroke in courtroom after he was found guilty by a judge

According to the Crime Check Foundation, Emmanuel Appiah was diagnosed with a stroke after collapsing after his court sentence was read to him.

The offense committed by Emmanuel Appiah is that he sold the axle of an abandoned car for GHC 500, and the owner of the car later appeared.

According to reports, the owner of the car, which had been abandoned for months, reported the event to the police, and Appiah was apprehended and arraigned in court.

Emmanuel Appiah was sentenced to three years in prison for stealing after several months of judicial proceedings.

When Emmanuel Appiah was transferred to begin serving his sentence, he became unconscious and was diagnosed with a stroke.

According to the Crime Check Foundation, Emmanuel is currently being held at the St Gregory Hospital in Budumburam, where he is being guarded by a police officer.