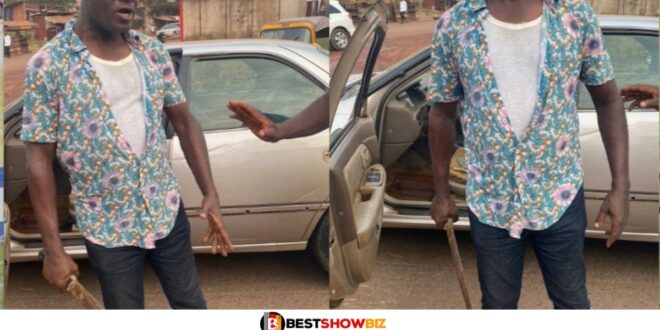 Man chops off co-worker’s arm for giving girlfriend ¢5ghc in his absence.

According to a UTV report, the event took place in the Central region’s Breman Asikuma Odoben Brakwa area.

It has been revealed that suspect Akwesi Amisah previously advised the victim, who is currently in critical condition, to avoid his girlfriend because he suspected the victim was having an affair with her.

According to reports, Akwesi Amisah’s girlfriend went to the construction site where he was working on the day of the incident to ask for child support money, but she did not meet him there.

She then asked the victim for GH5, to which he gave GH20 and asked her to return the change later.

A gossiper told Akwesi Amisah about his girlfriend’s visit to the site and the money his coworker gave her to buy food for the child when he returned.

Angry at the turn of events, the suspect fled the scene and later returned with a matchet, slicing off his companion’s hand.

The patient is recovering at Our Lady of Gace hospital in the Central District.

Akwesi Amisah, the perpetrator, is also in critical condition after being apprehended and brutally assaulted by locals after what he did before turning him over to the police.

While the police conduct their investigation, he is receiving medical treatment under police supervision.

Read Also  Remember The Cute Hairy Girl; Video Of Her Family Who All Have Full Body & Facial Hair Surfaces