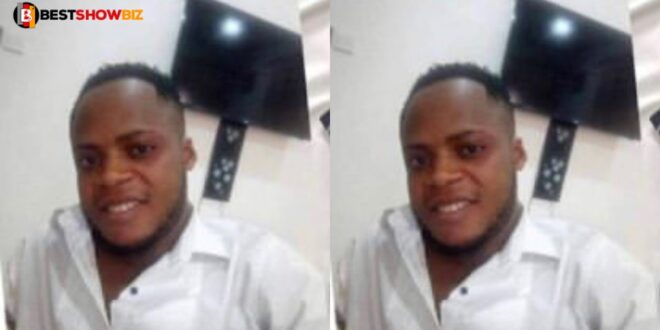 Man comm!ts su!cide writes in su!cide note that his phone should be given to sandra his girlfriend

A 23-year-old Auchi Polytechnic student, Solomon Oboh, is believed to have committed suicide by hanging himself.

Friday, September 10, the National Diploma 1 student in Public Administration was discovered dangling from the ceiling of his room. He had been there for several hours.

In his suicide note, the student requested that his phone be given to Sandra, his girlfriend, and fellow coursemate, whom he asked for forgiveness in the note, according to Punch Magazine.

In the course of investigating, it was discovered that the deceased had been embarrassed earlier in the day by his inability to correctly spell the words “computer technology” in front of his peers.

In a statement to the publication, a source said, “Solomon was in class on Friday and left the hotel after class; when we returned home later that evening, we discovered him dangling from the ceiling of his room in the Barack area of South Ibie.”

“He was a quiet young man who was very serious about his studies,” says his mother. His social life is non-existent, and he has never displayed any signs of sadness or anything else, “said the source.

A spokesperson for the polytechnic, Mr. Mustapha Oshiobugie, confirmed the occurrence but stated that he had not yet been briefed on the specifics.