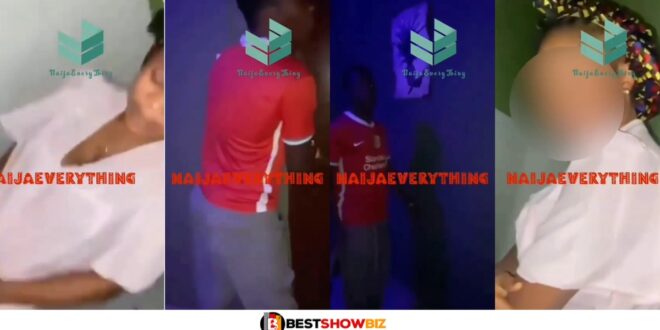 Seeing your girlfriend in the hands of your best friend is undoubtedly one of the worst emotions. That sensation of resentment and outrage is inexplicable. Can you identify it?

I see another man has fallen. An anonymous guy allegedly found his married wife in his best friend’s hotel room, according to a video that is quickly gaining popularity.

After a brief argument with the other man, the irate man in the video was startled to see his wife hiding in the bathroom when he entered his best friend’s room. She was wearing a short white nightgown.

When he first saw his wife, the deeply distraught husband in the video could not believe his eyes.

Read Also  Date Rush: Watch The moment Emmanuel "collapsed" on stage when he was rejected (Video)

The wife tried to run away while being caught on camera. When he asked her why she had gone to such lengths, she hung her head in shame.

Check Out The Video Below.