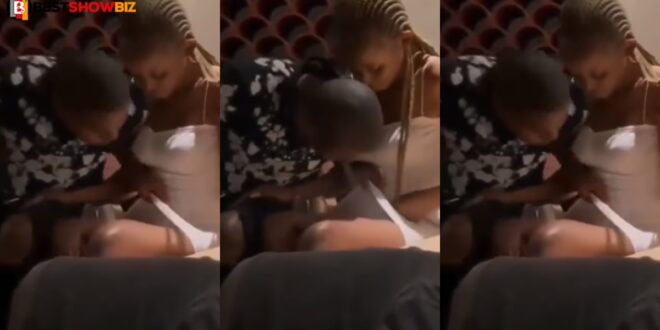 You think you’ve seen everything until you watch this video of a guy inhaling shisha smoke in his girlfriend’s private jar.

The extent to which some people will go in the name of having a good time is incredible, and the fact that he was applauded only adds to the absurdity!

A viral video shows a young man smoking and then opening the legs of his woman and pouring the residue inside.

The duo can be seen in the video enjoying a nice time with one another at a pub.

The man suddenly took a long shot of the shisha he was smoking, then opened the lady’s legs and drooled the contents from his mouth to the side of his dress.

Read Also  Images of a curvy nurse with two times the curves of Hajia Bintu have gone viral on the internet.

The lady, on the other hand, appeared calm and relaxed, as if she was enjoying herself.