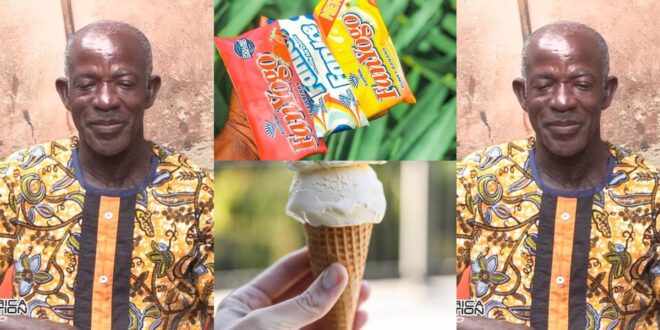 After years of selling ice cream, a Ghanaian guy shocked the internet when he revealed in an exclusive interview with SVTV how he was able to construct such a majestic building with his income and profit.
Joseph Agyiri, an elderly man, said that he began his business in 1983 and that it is the only source of income for his 6-bedroom bungalow.

In Tema, Ghana, the 56-year-old known as Our Day revealed that he has enjoyed selling and feeding children for the past 35 years.

In an interview with SVTV Africa, the father of nine announced that he has sold his product to almost every school in Tema.

Agyiri claims that the money he makes selling ice cream has been enough to support his wife and nine children, and that he has no plans to retire anytime soon.

“I have been selling hokey pokey and Yoghurt for 35 years. Most of the children call me Our Day. I have been to almost all the schools in Tema selling my ice cream,” he said.