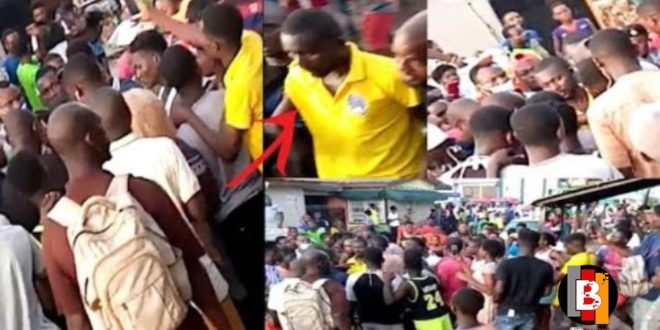 A man believed to be engaged in money rituals regretted the day he was born when his attempt to kidnap a schoolboy in Ashaiman went wrong in broad daylight.

The incident reportedly happened yesterday, November 16, 2020, when the boy had closed from school and was heading home.

According to reports, the ritualist has been monitoring the route of the schoolboy for quite some time now. He finally decided to go forward with his plans yesterday but for some shopkeepers saw him with the boy.

The people confronted the ritualist and surprisingly he wasn’t able to speak. The schoolboy also wasn’t able to utter a word as well because they both went dump upon being caught, according to reports.

The two were taken to a prophetess who prayed for them to be able to speak and it was later revealed that the man, whose name has not yet been revealed, wanted to use the boy for rituals.

watch the video below to know more;