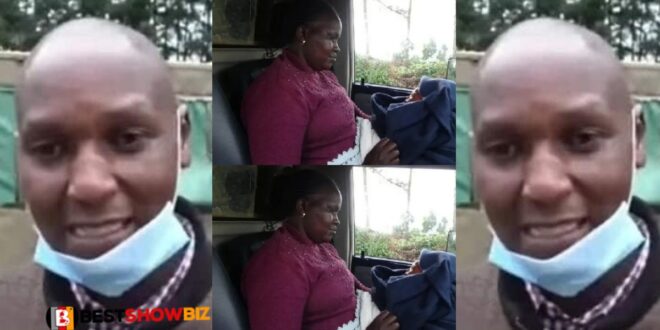 An enraged Kenyan man has caused the arrest of his wife for faking a pregnancy and stealing someone’s baby.

Wesley Rono, 31, of Ogilgei, Kuresoi North Constituency, Nakuru County, who has been married to Patricia for five years without a kid, claimed he was overjoyed by the pregnancy announcement only to find out later that she was lying.

“I was overjoyed when my wife informed me in December 2020 that she was expecting our first child.” “However, I noticed she was stuffing clothes around her belly to give the impression that she was pregnant soon after,” Rono stated.

The farmer and small-time businessman told Standard Media that he opted to play along like an idiot in order to see the ultimate purpose.

“My wife would get angry whenever I wanted to touch her belly to feel the baby bump.” She would not even let me touch her or get close to her, ” he explained.

Despite the fact that he previously knew his wife was not pregnant, Rono stated he fulfilled all of his wife’s requests over the nine-month period.

“She used to say she was going to Kericho for a pregnancy check-up. I always give her money when she needs it. This included funds to go to phony prenatal clinics, as well as funds to purchase baby clothing and other necessities. “

Patricia demanded money from her husband after nine months of pretending to be pregnant in order to give birth at Kericho Hospital on August 8, 2021.

Rono claims that he handed her the money and that she told him after a few hours that she had given birth to a healthy baby boy.

“She left on her own, promising to call and keep me informed about the status of the delivery. I was taken aback when she called later that evening to inform me she had given birth and was on her way home from Chepseon Trading Centre. The boldness of my wife astounded me even more. Even the most powerful lady in the world would not be able to wake up from her maternity bed 30 minutes after giving birth and board public transportation to return home, ” he said.

Rono claimed he sat back and waited for his wife to bring the kid home, but she chose to “recuperate” for a few days in her family house in Londiani, Kipkelion East Constituency.

Four days later, she reappeared, holding a newborn boy in her arms.

“I found her with the baby who did not look like a four-day-old child when I got home that evening,” Rono claimed.

Mrs. Rono did not have any money, so she agreed to trade the baby for a tea seedling for the same amount.

When investigators arrived at the suspect’s home, they discovered that she had recently planted tea on a section of her property. The suspect is also believed to be well-known in the area for obtaining abortions.

Mrs. Rono told the police that she gave the lady the tea seedlings on August 10 and then picked up the three-week-old infant in the middle of the night.

“It was just a desire to have a baby I could call my own and save my marriage that drove me to do it,” she explained.

Mrs. Rono claimed she discovered her infertility in 2015 after seeing a gynecologist.

“I had medical procedures to unblock my fallopian tubes in 2018, but I was still unable to conceive.” I had no choice but to do what I did, ” she explained.

Mrs. Rono corroborated her husband’s accusations that she faked a pregnancy by stuffing her tummy.

“During my first visit to a local dispensary, I received a prenatal booklet. I did not wait for a medical check to confirm the pregnancy after the nurse completed the basic information. I took the booklet with me when I left the institution, and I have been filling it in by copying notes from another woman’s booklet, ” she explained.

The alleged child trafficker was not apprehended during a combined operation by police officers from Kericho and Kuresoi police stations. The phone of the suspect was found in Kisii County. Her daughter, who was at home, refused to be interrogated.

“We have no idea who you are or what you want. She responded, “Leave us alone; we do not want to be disturbed.”

A frail young woman who claimed to be the suspect’s granddaughter was also present at the premises.

During the raid, the suspect contacted her to inquire about the police’ business and whether they were still present.

Because the region comes under their authority, Kericho County Criminal Investigations Officer John Onyango said they were working with their Kuresoi counterparts to track down the culprit.