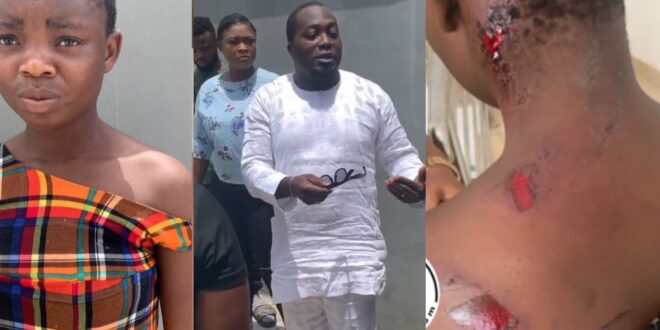 After allegations of him abusing his 14-year-old housemaid for refusing to give her body to him, a man is confronted by his neighbors

This incident occurred in Badore, Lagos, and was first recorded by actress Iheme Nancy, who claimed that she was on set there.

Mary Victor Okoro, a 14-year-old girl from Calabar, narrated her ordeal, saying the man asked her to sleep with him for 10,000 Naira one day.

The lady claimed that she declined and that her mother would find out one day. She also stated that she was a virgin and that she did not want someone to devirgin her.

According to Mary Victor Okoro, her uncle sent her to live with and work for him, and she is paid naira 10,000 a month.

She explained that she was beaten when she cleaned his shoe rag, but it dropped and she had to wash it again, and when he demanded it, he complained because it was already filthy.

The man, according to the child, sent his son to get him a belt, which he used to brutalize her and leave bruises on her body.

Iheme Nancy, on the other hand, confirmed that the man had been apprehended.