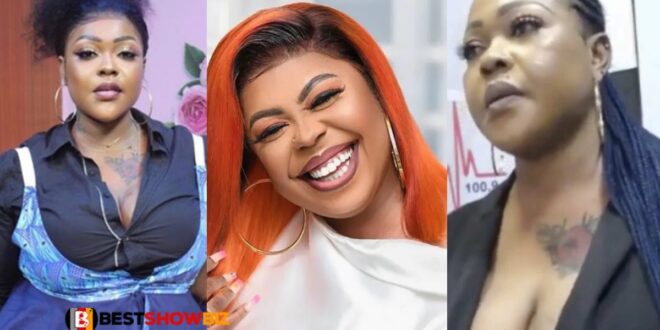 Mona Gucci’s leaked tape has surfaced on the internet, and what she says about Afia Schwarzenegger will astound you.

Mona Gucci, who introduced herself as “Maame Water Ba,” went all out in the chat, alleging that Afia Schwarzenegger intended to extort a specific Pinamang Cosmetics for $40,000, and she proceeded to intercede.

Mona Gucci in the leaked tape said that Afia intended to use the money to care for the young guys with whom she sleeps. The anguish of not obtaining the money impacted Afia Schwarzenegger to hurl insults at her and Kantanka TV.

It could be recalled that Afia Schwarzenegger and Mona Gucci were involved in a serious fight on social media in which Schwar insulted Kantanka TV, where Mona was working then.

Mona addressed the attacks directed at her and the lies Afia spreads in her name. One of the falsehoods she said was that Afia Schwarzenegger took a picture of a house and claimed it was Mona’s in an attempt to embarrass her.

The self-acclaimed lawyer was also overheard making a stunning disclosure about Apostle Kojo Safo reportedly cursing Afia Schwarzenegger, but she was pleased with the fact that it happened and would not comment more on the matter.

Afia Schwarzenegger is not a human creature, according to the person who taped Mona. She went on to say that it was obvious to everyone that if Afia Schwarzenegger did not find a social media fool, she would starve. There was a lot more spoken.