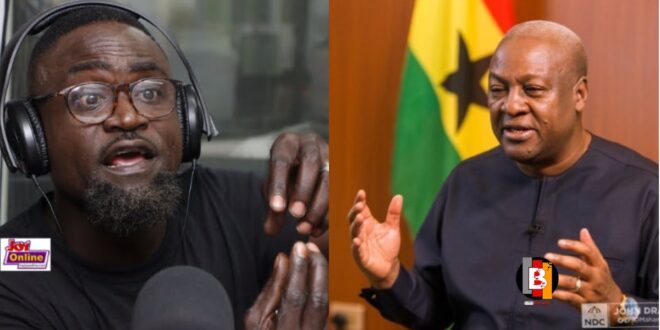 Popular sports presenter Patrick Osei Agyeman, widely known as Countryman Songo has mocked John Mahama and his NDC stating that they cant go to court because they are scared to be called ‘idiot’.

in a little recall, way back in 2012 when the NPP disagreed with the results of the elections filed an election petition in order to turn the presidential results.

with that, the General Secretary of the NDC, Asiedu Nketia publicly stated that any idiot can go to court.

as the saying goes what goes around comes around, here is the case the NDC says they will not accept the presidential results from the EC but cant file a petition but rather protesting.

Countryman Songo has mocked them to stop protesting and use the right channel which is to go to court.

according to the host of the Fire4Fire show, speaking on Adom TV, John Mahama and NDC have remembered their own saying that any idiot can go to court hence they are scared of being called ‘idiots’.

“If you say any idiot can go to court go to court. For now, you don’t want to be tagged as an idiot. In this life whatever you sow that is what you will reap. Respect yourselves please”.