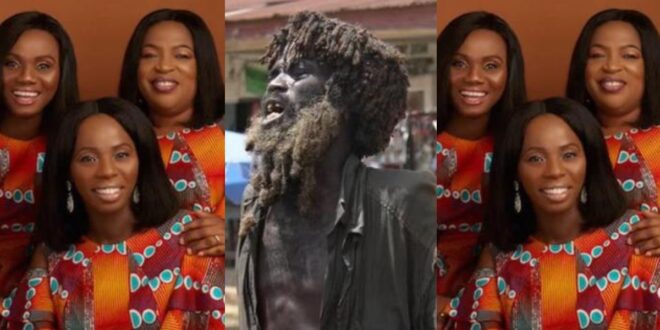 Mad man healed by listening to the song of Daughters of Glorious Jesus.

Gospel music is written and performed for a variety of reasons, including artistic enjoyment, religious motives, and as a commercial entertainment commodity.

More importantly, there is one major explanation why Christians listen to Gospel music: it is a means of connecting with God, their Creator.

Many Christians have testified on how listening to Gospel music helped them recover through a variety of ailments.

Daughter of Glorious Jesus, a Ghanaian gospel music group, has shared a testimony about how their song cured a mentally unstable man.

The trio showed how a crazy guy was cured by just listening to their song on Accra-based TV3’s showbiz 360, hosted by Giovanni Caleb.

They said the guy had been repatriated to Ghana from Italy, which made him lose his mind. Nevertheless, one hot afternoon on his rounds, he noticed their song playing in someone’s home, and while singing along, he was cured.

“By the grace and favor of God, we have heard a lot of testimonies that we can’t finish recounting but the one that is most touching to us is the one about a man who had lost his senses as a result of being deported from Italy. He was walking behind somebody’s window and heard one of our music playing and he sat there to listen to the song and suddenly he realized he was in tatters, he had come back to his right senses and thus returned home”.

“When they asked him where he had been and what has happened to him, he said: he heard one of his favorite songs by the Daughters Of Glorious Jesus behind somebody’s window and decided to sit and listen to the song. A moment later he realized he wasn’t himself, he was in tatters, that’s when he decided to return home and they confirmed that he indeed went mad after he landed from Italy,” they told Giovani.