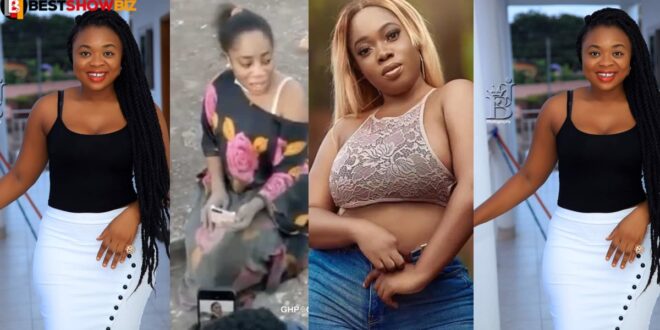 “Let’s pray for Moesha, a businessman has used her for ritual”- Adu Safowaa

Moesha Boduong, a curvy Ghanaian actress, has recently been acting strangely in the name of devoting her life to Christ and preaching against her previous habits.

Moesha may be seen preaching to a bunch of youngsters in a new video that has gone viral. Later, it was claimed that the lads saved her from k!lling herself, although this has been debunked.

Moesha’s current acts, according to Adu Safowaah, are the result of a spiritual contract she made after meeting a business mogul who is not human.

She requested Moesha’s fans to pray for her once more before things got out of hand.

Her post read; “She came across a Business tycoon that not human and had something to do with him…. ( kindly note that, No blame game here cux We all ain’t virgins and ve our dirty skeletons).
The Man exchanged her soul with Death but #JESUS and #mercy said NO. People close to MOESHA should be attentive, monitor her movement, stay close pls …. I prayed for her this dawn and I will do always.
All should remember her in prayers. It deeper. DEAR GOD, pls help us ALL.
#SharetoReachthem. #life“