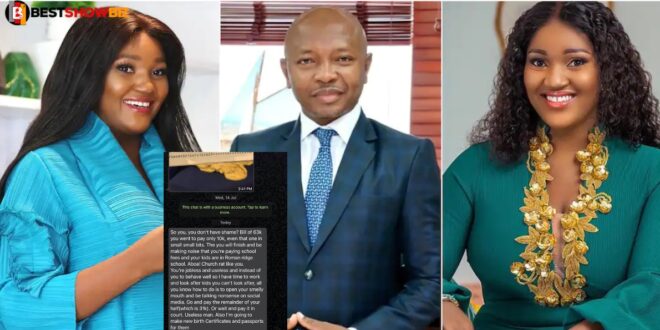 Ras Mubarak, a former NDC MP, has published a snapshot of a Whatsapp message from his ex-wife, Rasheeda, slamming him for not being able to pay his children’s school tuition, which totaled Ghc63,0000 and threatening to change their names to hers.

Read the rest of his Facebook post, as well as the screenshot of the Whatsapp, chat his ex-wife sent to him:

“The worst thing a man can do to himself is to have kids with the wrong woman. A scheming manipulator who should have been exposed for the fraud she is if the journalists who give her their platforms took their job seriously.

At least some of us don’t make a living from lying and claiming to be who we are not. I walk proudly with my chest high and my head up; unlike this phony self loathing character – Portia Rasheeda Adams, who parades as an influencer and claims to have sold houses worth millions of dollars in and out of Ghana, yet lives in a one bedroom rented apartment which rent she struggles to pay, yet has the nerve to call me names.

A lair who claims she has 10years’ experience as a realtor, and none of the journalists who gave her platform to lie to the country bothered to even double check on that.

Millions of dollars worth of houses sold, she claims. Well, if our society was working, the tax man would have taken an interest.

A woman who has changed 4 residences in 5years, changed 4 schools In 4years without consulting or at least agreeing with the father who pays the children’s fees. And she has the nerve, to send me such a message?

For the record, In all the kids previous schools (Brainy Bairn, Dolly Memorial, Victoria Grammar), any journalist interested in the truth can go find out how my daughters’ fees was paid. As a responsible father, I paid every Cedi or dollar with my sweat, but of course as a matter of principle refused to have anything to do with admission fees as I was not consulted about the changes in school and or my concerns completely ignored.

On this latest school she took the kids to where admission fee is over twenty thousand cedis per child, I would again not pay a dime in admission fees since phony Ms. Adams decided to be a “rich girl.” For someone with a notorious and ignoble record of changing kids’ school every year and three months, I won’t throw away my money. Moreover, I would not be forced to pay for something I cannot afford. Unlike phony Ms. Portia Adam, I don’t live a fake life.

Let me remind fake Rasheeda Adams if she’s soon forgotten where I picked her from. She was an ambulance chasing reporter way down the ladder at Metro TV in 2013 where she lied that she had a BA degree in English from a University in Nigeria just so they could employ you. You cried and begged me to marry you because you were carrying my baby. And with all your “mouth mouth,” you are currently driving an old rusty thing you call a car bought for you by a man who’s supposed to be your lawyer. Do your worst. Don’t threaten me. Go ahead and change my kids names and passports. What nonsense.”

below are the screenshots;