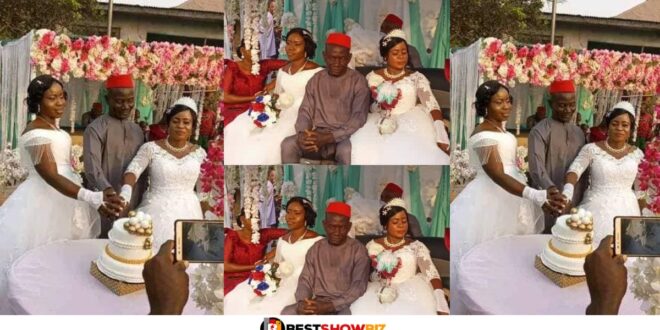 Polygamy, which was nearly eradicated from the African system of marriage several centuries ago due to the influence of Christianity, appears to be gradually gaining recognition once again.

A Nigerian man by the name of Nkanu has quickly become a sensation on the internet after he married two women on the same day in the state of Cross River, Nigeria.

In the community of Bazohure, located in the Abi Local Government Area of Cross River State, Nkanu tied the knot with both Mary and Jennet on the same day.

The viral wedding ceremony is said to have taken place on Saturday at Bazohure Playground, according to the reports.

Read Also  New Video: Man Takes wig, phone, and slippers he bought for his girlfriend after seeing her on a date with another man

Photos of the brides and the groom have quickly become the most popular content on social media.

While many people agree that polygamy is not wrong, some commenters on the viral images argue that the man should have married each woman on different days out of respect for their families.

some people believe that the fact that he wouldn’t even marry either of them separately suggests that he isn’t emotionally or financially capable of supporting both of them at once.