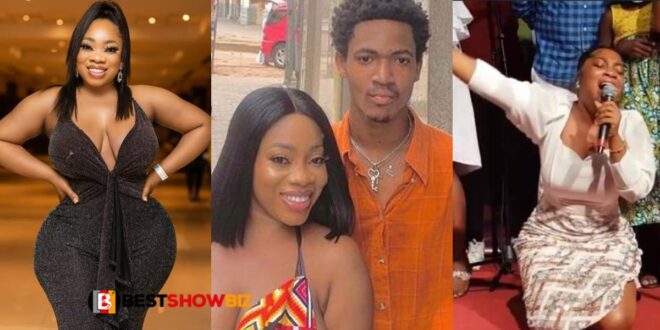 Leaked Audios: Moesha’s brother details how she saw Her occultic Boyfriend and all her secrets

They believe that wonders never end and that you should fear those closest to you rather than ghosts.

A leaked recording of Ghanaian actress Moesha Boduong, who has now accepted Christ as her personal savior, talking about all the bad things she has done has gone viral.

The audio we have comes from a conversation between Moesha’s brother, Nelson, and actress and entrepreneur Salma Mumin.

Salma Mumin filmed Moesha’s brother during their discussion and purposefully shared it, according to Aba The Great, an undercover Instagram blogger.

Nelson, Moesha’s brother, stated that his sister had two lovers: a Nigerian senator and a Ghanaian preacher, whom she had vowed would be the last ones she dated.

Moesha’s wealthy Nigerian lover called her over one day, but she declined and had to make up a story about missing her flight to please him, according to Nelson.

Nelson claims that during a WhatsApp conversation with the man, his sister saw him performing an occult with blood all over his body, which scared her and caused her to scream in surprise.

According to Nelson’s accusations, the guy threatened Moesha not to tell anybody what she saw on him when she phoned him, or else something bad would happen to her.

Moesha defied her occultic boyfriend’s warning and began telling everyone she knew about what she had seen, which prompted her to turn a new leaf since she was afraid of dying.

Nelson went on to say that his sister began giving away her money, as well as other things she had, in bundles to her close friends.

Moesha went to her pastor before selling and giving away her possessions, and he asked her to liquidate all she had earned from the man.

Moesha had done a host of horrible things, according to Nelson, including insulting married men’s wives who phoned and begged her to stay away from their husbands, paying blogs to ruin people’s reputations, and bribing award organizers to hack them on her behalf, to name a few.

listen to the audios below;