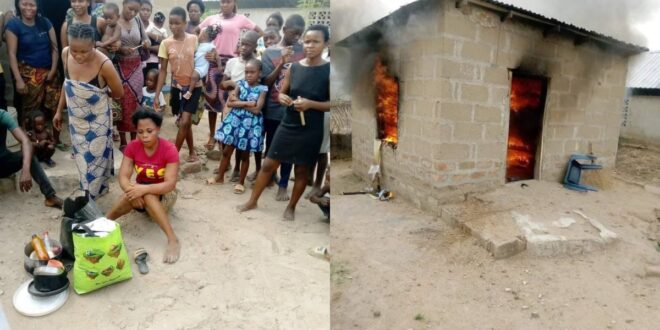 A rogue lady in Benue, Nigeria sets fire to boyfriend’s house over lorry fare to return home after visiting the guy. The woman is said to have set the house on fire when her boyfriend was away.

according to reports, the couple had a misunderstanding because the lady said that she does not receive transportation fare from him whenever she visits from the village.

She took time to carefully pick up some things she needed before carrying out the act on Thursday, April 22.

According to a witness, Joseph on the DailyTrust, the lady always complained about not receiving transportation fare from her boyfriend and having to rely on her relatives to return to the village whenever she visits him.

The witness went on to say that the issue of lorry fare had previously sparked a series of squabbles between them before the lady suspected of being pregnant set the house on fire.