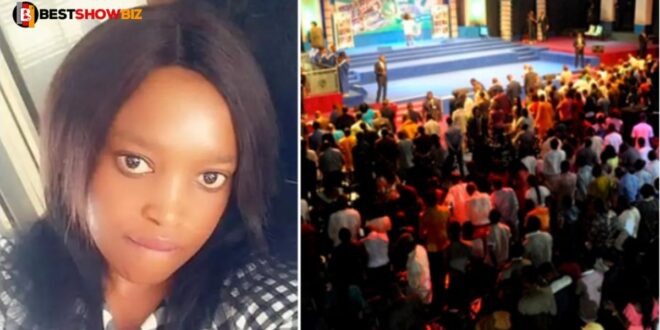 The young lady recalled how the pastor approached her and asked for a kiss on the lips from the ‘Holy Ghost.’ Ugochi stated that that was the last time she went to the temple to worship.

In her letter, she said, “I could recall when I used to attend Christ Embassy. The pastor there brought me out of the church and requested me to give him a “holy ghost” kiss. It was the last time I was in that church.

Her remark, which appears to be false because she did not present any evidence or even make it compelling enough, follows a viral video of a Ghanaian priest giving a “holy kiss” to three female students that went viral a few days ago and flipped the internet upside down.

Keep in mind that one of the students reported that the priest, Father Balthazar Obeng Larbi, kissed the three Bible readers as a token of thanks for their hard work since reaching level 100 of the program.

During an interview with Starr FM, she stated that the third student to be kissed in the video informed her colleagues that she was a virgin, which is why she hesitated to allow the priest to kiss her.

An anonymous lady who was dissatisfied with the situation stated that she felt her virginity had been violated by the unwholesome deed performed by the seeming pervert man of God after she was kissed by the priest after the incident occurred.

In fact, she was a virgin when the father kissed her for the third time, and that’s why she gave her cheek to the father to kiss, but he forced her to kiss him on the lips instead.” The lady is alleged to have stated that after the occurrence, she felt her virginity had been broken by her father.