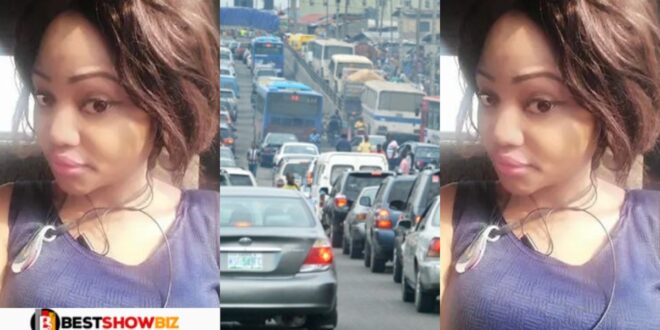 Lady gets k!ssed in traffic by stranger after she pulled her head out to get fresh air

Ani Berny, a Nigerian lady, revealed how she received an unexpected kiss after deciding to raise her head out of the car to get some fresh air while stuck in traffic.

She stated on the popular microblogging site Twitter that she merely intended to take a nice breeze while stopped in traffic.

According to Ani, she boarded the car but was caught in Lagos traffic, thus the heat prompted her to take the breeze as she leaned out the car window.

To her surprise, someone unexpected came through the window and kissed her before fleeing.

“Never will I bring out my head to catch a nice breeze when stalled in traffic, someone just kissed me and ran away,” she wrote. This Lagos, I swear, is not for normal people. I scrubbed my nose until it was bright red like a clown’s, I am a good person, I didn’t deserve this.”