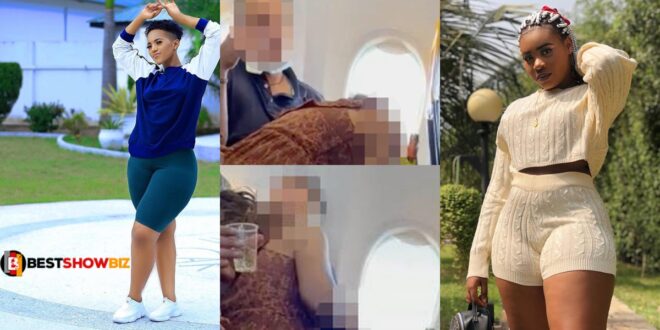 Shocking footage captured the moment a plane passenger was performing a sex act on a man mid-flight.

The video was shared on Twitter by a fellow passenger. It shows a man with a face mask around his neck relaxing against the side of a cabin while his female companion’s head bobs up and down in his crotch.

The duo then begins kissing while the male fumbles with the woman’s clothing. The woman then pulls her hair back and appears to have oral sex with him once more.
In the caption, the person who submitted the photo wrote: “Ryanair deserves credit for permitting this. When I book my next flight, I’ll keep this in mind.”

Read Also  Old video of Odartey lamptey playing with his newborn child, before he found the kid was not his will break your heart (video)

Passengers who engage in such behavior may be ejected from the plane, according to Ryanair’s onboard flight guidelines.