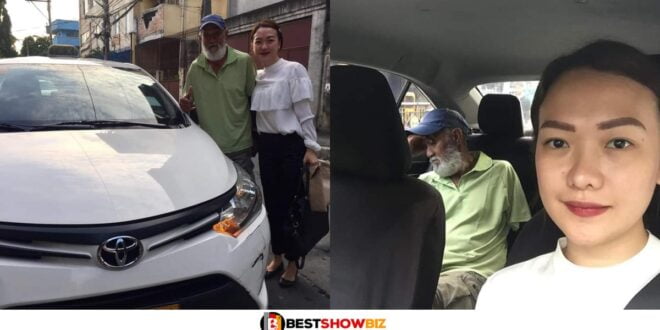 Lady drives herself home after taxi driver he bored told her he was tired.

Cristina Tan, a young Filipino lady in desperate need of a cab, did something shocking to a driver and has earned the praise of netizens.

It was said that the lady had taken a cab and was on her way home, but she noted that the driver appeared to be elderly and fatigued so had to improvise.

According to sources, she was on her way home when she flagged down a cab, but the driver was an elderly gentleman who appeared exhausted and thus chose to drive.

Cristina reportedly offered to take the man’s cab home while he napped, according to Goal Cast. By taking control of the cab right away, she eased the driver’s fears that she wouldn’t be able to handle the manual transmission.

The 70-year-old unnamed driver has reportedly been driving commercial vehicles since the 1960s, according to reports.

Despite his age, the guy continued to work as a cab driver to support his family.