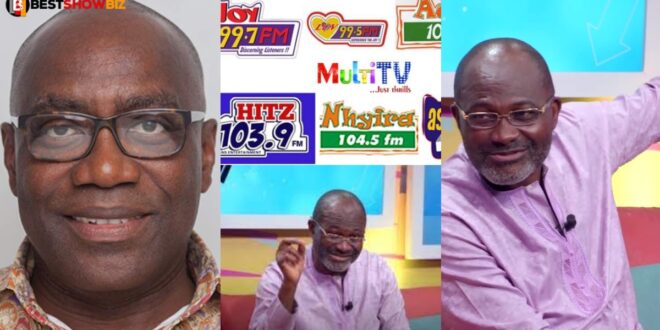 Kennedy Ohene Agyapong, Member of Parliament for Assin Central, is furious with the Multimedia Group for making a complaint with the CID and then hauling him before the Ghanaian parliament’s Privileges Committee.

Kennedy Agyapong has told the CEO of the Multimedia Group to call his Joy FM employees to order before exposing the CEO, Kwasi Twum, in a new outburst.

The Multimedia Group, one of Ghana’s largest private media organizations, was founded, according to Kennedy Agyapong, using earnings from the criminal drug trade, and he can prove it.

He advised Kwasi Twum to be careful because one “Jones” is still alive and will show the entire country of Ghana where he used to transport the drug to be sold, with the proceeds being used to develop multimedia.

“Joy FM the drugs that were used to establish your firm if you joke I will expose you. Jones is not dead, I will show you, people, where you used to send the drugs,” Kennedy Agyapong said in an interview.

After Erastus Asare Donkor, a prominent reporter with the Multimedia Group in Kumasi, testified at the committee set up to examine the Ejura shooting, Kennedy Agyapong ordered him to be beaten cruelly.

Kennedy Agyapong made similar statements about Ahmed Suale, the investigative journalist Anas Aremyeaw Anas’s companion, which resulted in his death. In order to prevent the same thing from happening to Erastus, Multimedia filed a complaint, citing the same issue as Ahmed and Kennedy Agyapong.

Kennedy Agyapong voiced his anger with the NPP for not hauling Muntaka Mohammed to the privileges committee when he leveled complaints against Supreme Court Judges.