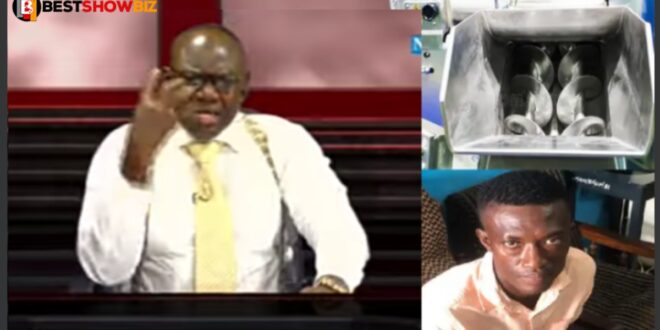 Kweku Annan exposes the two machines used by abesim k!ller in his operations

The disclosures and controversy involving Richard Appiah, for allegedly killing children and hiding their bodies in a refrigerator at Alaska Junction near Abesim in Sunyani, are becoming more serious by the day.

One is in Abesim and the other is in Sunyani, Kweku Annan of Net 2 TV disclosed.

According to Kweku Annan on Net 2 TV’s’ The Seat ‘, Richard Appiah was using the grinding machine at Abesim to cut the children’s bodies into pieces. He added that the other grinding machine is in Sunyani, where human parts are traded in and out of Ghana for religious purposes.

“This ritual killing is not only done in Abesim, but also in Sunyani. There are two machines used to grind human parts, one in Abesim and one in Sunyani. Richard used one of the machines, so the police had to examine his residence thoroughly. All human transactions in Ghana and adjacent nations now revolve around that region, “Kweku Annan said.

Richard Appiah, in my opinion, should be executed in public to send a message to other culprits.