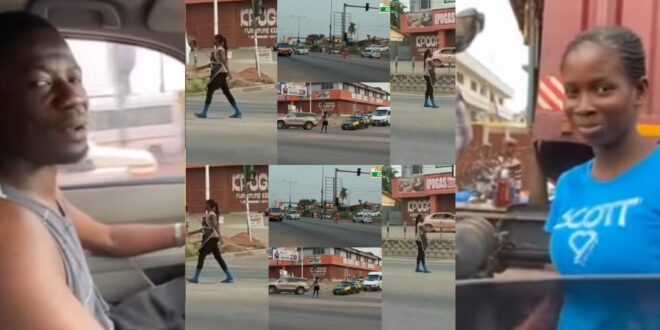 Kwaku Manu, an actor, and YouTuber has given the Sachet water seller a reward for pausing her job to guide traffic at Top High in Kumasi when the traffic lights went out due to a power outage.

People are talking after a video of a sachet water/pure water seller directing traffic on the Kumasi – Accra highway went viral.

A young lady selling ‘pure water’ was seen beautifully guiding cars on the Kumasi – Accra highway after the lights went out in a recent video spotted by bestshowbiz.com on the internet.
After discovering that the traffic signals were not working due to a power outage and that there was no MTTD officer around to do his duty, she agreed to guide traffic.

Kwaku Manu has met and talked with the seller of sachet water. She goes by the name Comfort, according to her.

When asked whether she had gone to school or received some form of training related to the duties of an MTTD officer, Madam Comfort said that she had not.

According to the lady, she has seen many instances when members of the Motor Transport and Traffic Unit (MMTU) were controlling traffic, and she has learned something small as a result. At the time, she had to stop selling in order to help alleviate the traffic jam.

Kwaku Manu, who was overjoyed, gave money on the woman and others in his immediate vicinity.

Madam Comfort indicated that she is still available to assist anytime there is a traffic jam at the place where she sells water.