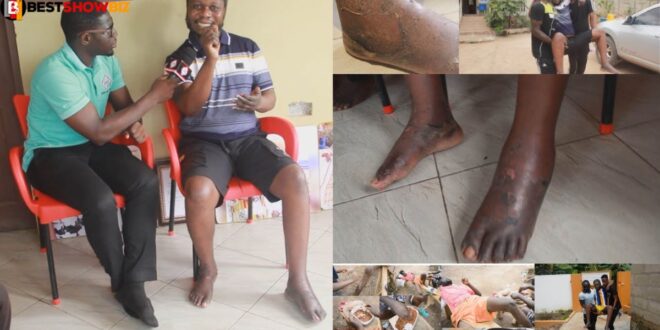 Frank Fiifi Gharbin, a movie director, has described his contact with juju while working in the film industry.
While undergoing treatment for his swelling legs at a spiritual and herbal center, he agreed to an interview with Inside Prime TV.

The actor shared a story about one of the many strange encounters with witchcraft that have happened to him since entering the Kumawood film industry.

He worked on a project in Ejura, in the Ashanti Region, and, after hours, an Ejura-based colleague named Dunga suggested that they go to a drinking establishment. Fiifi Gharbin agreed, and the two went.

On their way back home, the road was pitch black and deafeningly silent, and they noticed a weird man dressed as a priest approaching them from behind.

Read Also  Armed robber sh⌾t dead after he was bailed to appear in court, he d!ed in another robbery.

The man began asking him questions and intimidating him, but he stayed silent, refusing to respond, and then left without a trace.

After he had left, Dunga informed him that a strange guy had approached him, Frank Gharbin, and attempted to harm him, but was unable to do so due to his strong spirit.

according to Dunga, his spiritual eyes allowed him to see whatever the odd person had come to perform, as well as the person from the industry who had sent him.