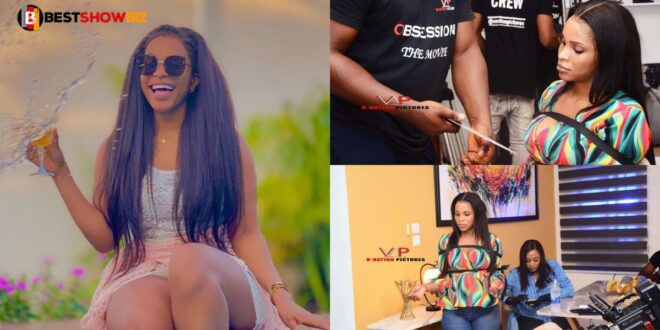 In addition to her work as a movie actress and television personality, Benedicta Gafah is now filming a blockbuster film in Nigeria with a number of A-list Nigerian actors, which will be released later this year.

Shaffy Bello, Gideon Okeke, and Mercy Aigbe are among the movie stars that are now filming on the set of Emmanuel Chidiebere Nwosu, a rising filmmaker who is also a producer (A.K.A Dir Mo.)

A division of Vnation Pictures will be responsible for the production of the film, which will be executive produced by Vincent Tobi.

Vincent Tobi, the producer and Executive Producer of the upcoming film, stated that the production company behind the film had indicated that 20 percent of the proceeds from the film’s sales will be donated to the Vincent Tobi Foundation in a statement (VTF).

A short video by Whistling Woods and SAE Dubai Alumni Chidiebere ‘Mo’ Nwosu, entitled ‘Accused,’ was released earlier in 2021, and it featured Alvin Abayomi and Jessica Williams expressing their genuine emotions. Despite the large number of people that watched the film on many different online sites, including YouTube, it received multiple award nominations and won two of them in the process.

Obsession is Dir Mo’s first feature film, which will be released in cinemas across Nigeria and will also be shown at a number of film festivals across the world.

As promised by the stars of this film, moviegoers can expect an action-packed story to unfold on the big screen.

Below are some pictures of the movie set