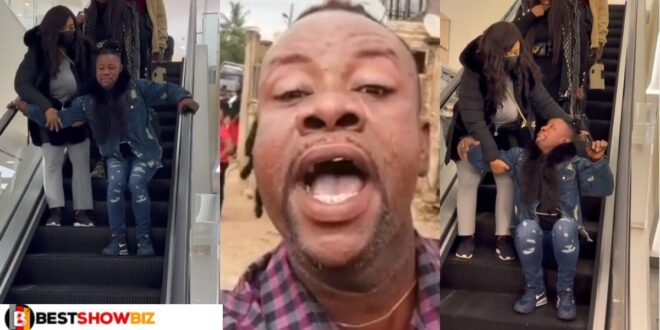 Nana Yeboah, a Kumawood actor, has provoked outrage on social media after being shown in a video attempting to descend a series of escalator stairs in faraway France.

He was seen in the company of several colleague actors, including Jackie Appiah, in a humorous Instagram video.
They looked to have gone shopping in a mall in France and were on their way out when the video of them descending the escalator was captured.

Everything was going swimmingly until the escalator began to descend, which appeared to scare Mr. Yeboah.

He abruptly removed his nose mask and asked one of his colleagues to assist him because he appeared nervous.

The Kumawood celebrity, known for his “pepper mouth,” looked to be humbled by the concept and even sat on the falling flight of stairs.

When they arrived at the bottom, he appeared to have regained his confidence and was overheard saying something that made the rest of the group chuckle.

From the looks of it, he just wanted to have some fun and make his fans and followers laugh so they could get a sense of his mischievous ways.