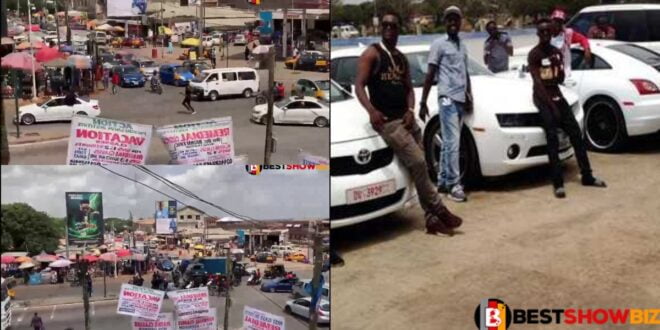 Unknown perpetrators shot and killed Akwasi Boakye, who was said to be working as a Sakawa boy.

Hundreds of coworkers of the 23-year-old who was killed in Kumasi last week after buying a brand new Range Rover over the weekend shut down key highways in the Ashanti Regional Capital Kumasi to pay their respects to him at his home in Kronum Abuohia.

Akwasi Boakye, a 23-year-old Sakawa resident, was shot and killed by unknown gunmen a day after unveiling a brand-new Range Rover.

Osei Kwadwo of Pure Fm, who was there at the incident, claims that the victim was discovered lifeless in a pool of blood.

The Abrepo Junction to Suame Roundabout and Suame to Kronum routes were both blocked by coworkers of the deceased.

They ran red lights, causing a traffic bottleneck in an already congested metropolis, in order to arrive at the deceased’s house on time to mourn him and his family.

According to Osei Kwadwo of Pure Fm, MTTD troops on the road were unable to control the situation due to the ‘Sakawa’ guys’ attitude and behavior.

They appeared to be highly inebriated, while others were seen smoking cigarettes and dried leaves presumed to be Indian hemp in an effort to cope with their grief over their colleague’s death.

The deceased’s body was sent to Komfo Anokye Teaching Hospital for an autopsy, while Suame Police Command launched an investigation into the incident.